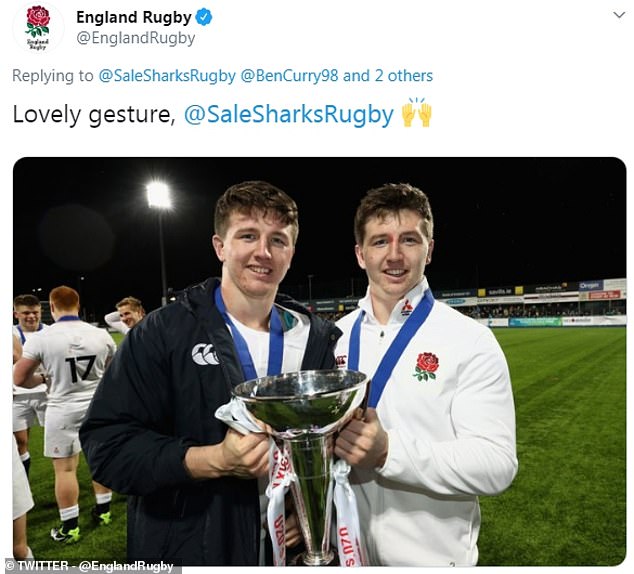 Tom Curry will have a special VIP cheering him on in Saturday’s Rugby World Cup final against South Africa –  his twin brother Ben.

Identical twin Ben was due to play for Sale Sharks against Bristol on Friday – but now he will be in the sell-out crowd in Yokohama.

Both brothers play for Sale Sharks, but Ben didn’t make the England squad.

But, following a social media campaign #GetBenToJapan, Sale Sharks have given him a few days off to fly out in support of Tom, who rapidly emerging as England’s player of the tournament.

Sale said it was a “once in a lifetime experience” for the 21-year-old.

Ben, also a flanker, has been capped for England at Under-20 level, and was called up to the senior squad for the tour to Argentina in 2017, but did not make an appearance.

He told the BBC’s Radio5 Live Drive programme:”I never dreamed this would happen. Our Mum and Dad are out there, but I was due to play a match on Friday for Sale Sharks, so there was no way I could make it out there. The club have been fantastic and I really want to thank all the people involved in the #GetBenToJapan campaign for making this possible. It is a fantastic privilege to be out there and seeing Tom.”

Tom was presented with the Player of the Match trophy after his fantastic showing in the All Blacks defeat on Saturday.